Quickly is the recommended tool for opportunistic developers on ubuntu.

When we created it 3 years ago, we made some opinionated choices, which is the essence of the project. We had back then a lot of good press coverage and feedbacks (Linux Weekly News, arstechnica, Zdnet, Maximum PC review, Shot of jak and some more I can’t find on top of my head…)

Some choices were good, some were wrong and we adapted to the emerging needs that happened along the road. Consequently, the project evolved, the needs as well and we tried to make them match as much as possible. Overall, my opinion is that the project evolved in a healthy way, and has strong arguments seeing the number of projects using it successfully for the ubuntu developer contest. Indeed, from the ~150 submitted projects, most of them were created with Quickly and seeing the few support we needed to do, it means that most of things are working quite well! Also, the comments on the developer contest seems to be really positive about Quickly itself.

So? Time to go the beach and enjoy? Oh no… Despite this great success, can we do better? I like that sometimes, we can step back, look around, and restate the project goals to build an even brighter future, and I think now is this time and that’s why I want to announce a Quickly reboot project! 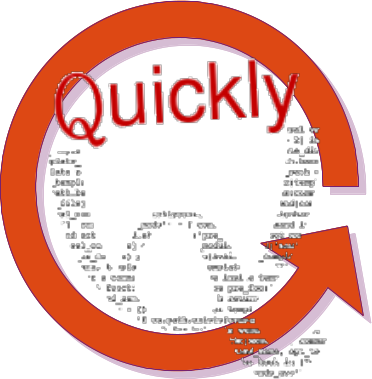 We will need to port Quickly itself to python3, we have no hard deadline right now on it, but it’s something (especially with unicode versus string) that I want to do soon. As this will ask a lot of refactoring, I guess it’s time to evaluate the current needs, drop some code, completely use another direction to attract more 3rd party integrator (like do people want to integrate Quickly with their favorite IDE?), encourage template developers, make everything even more testable than today to avoid regressions… A lot of things are possible! So a reboot, meaning “let’s put all aside, list what we have and what we want to do” is the appropriate term. :)

!Do you have a detailed plan right now of what is coming?

No… and that’s exactly what I wanted! Well, of course, I have some ideas on papers and know globaly where I want the project to evolve, but the whole plan is to get the community contributing ideas, experiences before the first line of the reboot is even written.

I’m sold! how to participate?

I will run some google hangouts from the Quickly Google+ page. Those will be hangout on air (so you can just view them live or after the hangout without participating), asking questions/suggestions on #ubuntu-community-onair on freenode (IRC) for answering live, or you can jump in and ask directly during the show. :)

The current hangout will be also available (with an IRC chat box) on this page.

Those hangouts will be thematic to focus the discussion, and will be announced on the google+ Quickly page, this blog, the Quickly mailing list and so on…

The first step to build this Quickly next gen[1] is to gather some developers feedback. So, if you are a developer who used Quickly (or not!) and make softwares for ubuntu, in the context of the app showdown (or not!), we will love to ear from you! The goal of the session is not to point to any particular bug, but rather to share how the experience was for you, what template did you use, what template you would have used if it existed, what went well or bad with the workflow, when did you need to ask a question about a particular subjects? Of course, we are not limited to those questions.

You can directly jump into the hangout to ask your question live or just assist to the hangout on air and add a comment to the live event to get it read during the show.

The two first sessions will be live on different hours next Thursday and Friday: See those events are on the Quickly Google + page: subscribe to those hangouts on air to be sure to not miss them!

Next topics in the following weeks will be:

all of this will be published on this blog and on the google+ page soon. I hope you are as excited as we are and will massively join us.

[1] Term which seems to be use by the cool kids