As every 6 months, the Ubuntu Party has taken place in Paris, in addition to the 12 Ubuntu install parties in France.

This event, organized by ubuntu-party and the French loco team, ubuntu-fr, took place in the "Cité des sciences et de l'industrie" in Paris, during the week-end of 29 and 30 November 2008.

We received there 4000 visitors, awesome statistics given and certified by the "Cité des sciences" overtaken last year's record, when we reached almost 3000 visitors! 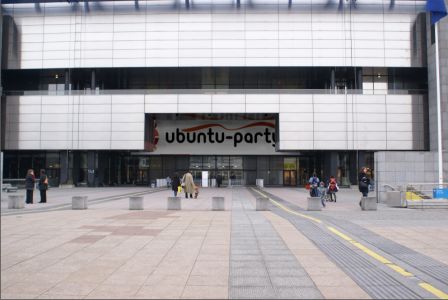 In a nutshell, we had:

All those videos have been directly diffused over the Internet and will be soon available online.

Thanks to our press contacts, we had a full page dealing with Ubuntu in a French national newspaper called "Libération" (140 000 papers a day). After the party, the national French press agency has published a news about the party and this has been widely diffused in all kinds of news feed.

Great events, uncredible voluntaries, large audience of people just discovering ubuntu and free software! Some weeks to get off being tired and the road is opened for organizing the jaunty ubuntu party! Hope to see you, with more and more people on the next turn, in May 2009! Makes Tux fly!

[2] We organize some release parties for that!