I'm proud to announce the availability of Quickly 0.4 in lucid. This new release brings shiny new features (more than 6 months of heavy development), lowering again the barrier for opportunistic developers. Development should just be easy and fun!

Well, a lot of stuff, but more precisely, let's me highlight some special features from the NEWS file content, containing the full story.

The ubuntu-application template and derivatives:

One of the main feature of 0.2.x was the ubuntu-project template. This one has been renamed to ubuntu-application. Your app will be transitioned automatically to this new template thanks to the core supporting upgrade in templates and projects now[1]

What seemed to have given a lot of trouble to Quickly users in 0.2.x was the gpg key setup. For those who don't know, this key is needed when you upload your package to launchpad. Now, Quickly is more clever about this and doesn't bring random bits to create your email address. This happens in two steps:

Another patch for ssh key has been approved in Launchpad too, bit we will integrate the client side in 0.6. Easy and fun, didn't I say that already?

Choosing and sharing to multiple ppa and bzr branches.

You can now choose to which ppa you want to share/release your code. You can use Use --ppa ppaname or --ppa team/ppaname (shell completion even work with that! I must admit if it's very slow (more than 10s) due to a lot of requests to Launchpad). You can setting that up definitively by quickly configure ppa <ppa_name>.

Previously, license command asked you to fill a Copyright file which can contain tweaked copyright and author names. Now, this file has been removed and we keep only one AUTHORS file where you put your name and those participating in the project. You can create your own COPYING file[3] for your own licence, otherwise, it will license with command line supplied license (MIT has been added). At first share/release, the license is now automagic if you didn't licensed previously, and it will take your name/email and license your proect under GPLV3. Each share/release command still update the license to all your files as in 0.2.x.

Again, all your project created with 0.2 will be migrated automatically to this scheme. Don't bother about about licensing if it doesn't interest you. Quickly is doing the right thing (at least, we try) for you.

The about dialog is now fiddled automatically with up-to-date information at each "release" command. It will add your logo, the current version of the program, home page, the copyright, the authors, license… No more need to care about having this updated manually ! (the Credits show the authors, the licence… the licence :)) 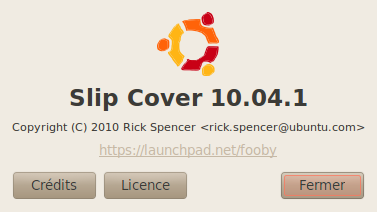 hum, it seems that Rick is already enjoying using spaces in his project name ;)

The ubuntu-application template brings a new version scheme to avoid errors on failed share or release package (the critical section has been narrowed). So, if you release this month (April 2010), your applications would be 10.04. If you release a new version again in the same month, it will be 10.04.1 and so on… When you share, it just takse the last version and adds -publicX like 10.04.1-public1, then 10.04.1-public2 and so on. Of course, it's still possible to provide your own version as a parameter of quickly release or quickly share, but you won't have the full sweet safety field of Quickly for avoiding rejected package :)

Making a release is quite tedious. In addition to push your code in your branch and the package (well, that's the goal of the ubuntu-application template after all), you should also release an upstream tarball, signing it, pushing those, create a milestone, attaching them and also provide a list of what's NEW for the release note. Seems a long task, no? Well, good news is that quickly release does all of this for you! for completing and releasing the changelog as a release note, it takes relevant message from quickly save "your message" or manual bzr commit to create a changelog with all those information. Next step in 0.6 will be to make a Launchpad announce the new release automatically, but this requires again extending the API, so, some Launchpad hacking[4].

You can have a look here for a dummy example (see "Series and milestones").

python-distutils-extra rocks at detecting with a lot of magic your python dependencies. Unfortunately, it can't detect the dependencies for non python stuff and manually launched commands. It's now possible to provide a manual list of dependencies for your app. For this, quickly configure dependencies is your new sweet friend.

All those command now will show some dots about the progress (--verbose for full log), but filter annoying output to only focus on what matters. If some warnings and errors are encounters, it will print them in a summary asking you if you wish to continue

WARNING: the following files are not recognized by DistUtilsExtra.auto:

This is to avoid the whole bunch of information that can lost people in focusing on the important ones.

Now, all projects will contain an apport hook and a launchpad integration in the menu. Of course, they only appears if you have the current package integrated. So, the project will still work on other distros, just not showing the integration.

Currently this only works for installed package (so, you can't run that for trunk). Existing project are updated as well to get this goodness. Some more work are waiting approval to get it work from trunk too (liblaunchpad waiting merges)

Just run quickly debug for some sweetness in the debug world with winpdb!

So, with the importing tempate feature, here is a new template resulting from some requests about building command line only application. Again, there is 0 line of code, just importing commands from ubuntu-application template!

I'm launched and my args are: foo

You also have a full of default binded option like:

those are good examples to see how to handle debugging level and random command line options (with eventually, parameters, counting occurrences of a parameter, …).

Of course, only a subset of ubuntu-application commands are available in this template (no quickly add dialog, neither quickly design, for instance ;)). Hope that will bring fun for making CLI application too! 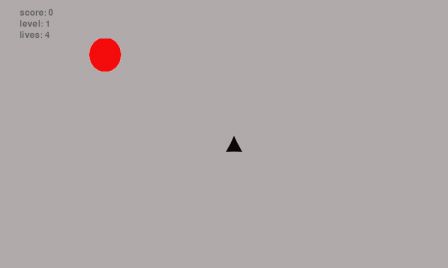 Like ubuntu-cli, ubuntu-pygame shares a large part of ubuntu-application commands and is just a new boilerplate (no command written, again). You should check out the full and complete tutorial available at quickly tutorial

Well, that was only a subpart of what was backed out in Quickly 0.4. We have tons of fixes and small enhancements that would have deserve to be put there. This post is already quite long so, I won't continue on. Check out the NEWS file if you want the full story!

Now, let's see what will be in 0.6. We will discuss the new features at next UDS, hope you can join either in person or by IRC. One of the next features will be nautilus integration thanks to the API. Some prototypes are already available as you can see them below. Launching a dedicated gedit session with some plugin enabled is also on track. 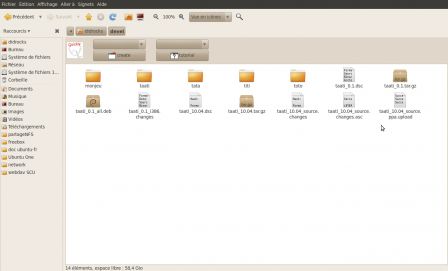 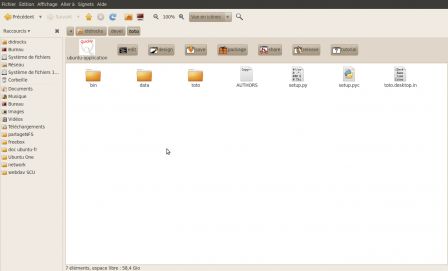 Let's keep it hot and don't hesitate to comment on the new features. Also, what do you think should be added to 0.6 (maybe renamed to Quickly 10.10)?

We have already a good bunch of documentation for Quickly, even if some like my blog posts should be refreshed for 0.4, the wiki page is still a good starting point, and I heard that there will be soon some new videos available…

Hope you will enjoy 0.4 and we always welcome your feedback on #quickly on freenode!

[1] so, you will understand that once running 0.4, you won’t be able to switch back to 0.2.x due to this transition (a lot of things will happen the first time you will either launch a command or use shell completion in your existing project. The good news is that, you don’t have even to care about this ;)

[2] it’ll create one for you if you don’t have any. However, it won’t still upload it to Launchpad as it raises some security concerns by the launchpad guys. We will try to tackle those issues at Maverick UDS with them to have clearly nothing to do for 0.6.

[4] should be easier than the gpg/ssh stuff though